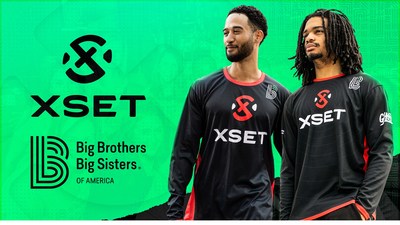 The new partnership will focus on awareness for youth interested in gaming as a career, emphasize the need for volunteer

The mission of Big Brothers Big Sisters is to create and support one-to-one mentoring relationships that ignite the power and promise of youth.  Each volunteer (called a  'Big Brother' or 'Big Sister') spends time with their mentee (called 'Little Brother' or 'Little Sister') enjoying free or low-cost activities. By partnering with XSET, Littles will have a chance to not only enjoy the fun of gaming but learn behind-the-scenes details and connect with experts to learn about potential career opportunities in the gaming industry.

As part of the partnership, XSET professional gamers will include the BBBSA logo on their jerseys, and Big Brothers Big Sisters will be featured during live streaming events, social media activations and other marketing initiatives. In addition, $5 from every purchase of BBBS/XSET co-branded merchandise will go to BBBSA.

As for talent, XSET pros Raidel "Joke" Brito and Jordan "ProoFy" Canno will serve as official 'Big Ambassadors' in Detroit, MI and New York City where they will meet regularly with Bigs and Littles, sharing their perspective on careers in gaming and provide advice and encouragement to reinforce the message that anyone can be a gamer. The two organizations will also work together on a unique recruitment campaign to encourage more Bigs and Littles to get involved, as well as launch a fundraiser to support Big Brothers Big Sisters' important work focused on Justice, Equity, Diversity and Inclusion (JEDI) initiatives.

"Partnering with Big Brothers Big Sisters is such an exciting milestone for us," said Marco Mereu, COO and co-founder of XSET. "XSET's mission of diversity and inclusion aligns perfectly with their work. We are here to bring gaming to a new generation and want to show kids  and the world  that gaming is for all."

"Mentoring opens doors of possibilities for young people, and by connecting with partners like XSET, it allows our Littles to learn first-hand about this growing industry," Big Brothers Big Sisters, said Adam Vasallo, Chief Marketing Officer of Big Brothers Big Sisters of America. "We also appreciate the financial support, which will allow our agencies across the country the opportunity to reach more Littles who are waiting to be matched with a Big."

The partnership kicked off with an exclusive live virtual events in NYC with Joke and in Detroit with Proofy.

About XSET
Founded in 2020 in Boston by gaming and pop culture veterans Greg Selkoe, Marco Mereu, Clinton Sparks and Wil Eddins, XSET is the fastest growing gaming organization and lifestyle brand in history. XSET fields some of the world's top competitive esports teams in titles including Valorant, Rocket League, Rainbow Six, Fortnite, Warzone, Apex Legends, eNASCAR and more. Built on a foundation of a diverse and inclusive gaming culture, XSET is building the preeminent brand for today's growing Gen Z audience of gamers. The organization continues to grow at a breakneck pace, partnering with high-profile brands such as Ghost Lifestyle, SCUF Gaming, Roots Canada, HyperX, Quality Control Music, Respawn, Fanshark and Wahlburgers and is working with socially positive causes including Big Brother Big Sister of America. Since its launch, XSET has attracted top-tier, world famous talent across music, sports and entertainment to its shared vision, including Grammy-nominated hip-hop artists Swae Lee and Ozuna, BMX legend Nigel Sylvester, 14-year-old female Olympic skateboarding phenom Minna Stess, and professional athletes such as NFL stars Kyle Van Noy and Adrian Colbert of the New England Patriots.  Sitting at the intersection of gaming and culture, XSET's robust merchandise offerings are some of the most sought-after in the industry, featuring high-profile collaborations and exclusive pieces fans can't find anywhere else. XSET is defining what it means to be cultural leaders in the space for future generations to come. For more information visit XSET.com #reptheset